AN INDEPENDENT Scotland’s membership of the EU cannot be firmed up until the UK Government makes a move, the European Commission has confirmed. 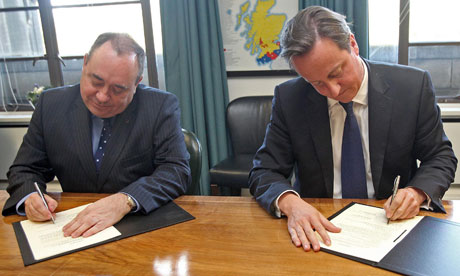 Now the starting gun has been fired, one of the most important questions in the run-up to the referendum is whether an independent Scotland would have to renegotiate EU membership.
Top European Commission spokeswoman Pia Ahrenkilde-Hansen told EurActiv the question could not be answered on the EU side ahead of the referendum unless the UK government asks the question.

She said: “It’s indeed not the role of the commission to express a position on questions of internal organisation relating to the constitutional arrangements in the member states.
“What I can add, however, is that, concerning certain scenarios such as the separation of one part of a member state or the creation of a new state these would not be neutral as regarding the EU treaties.
“The commission would express an opinion on the legal consequences under EU law on request from a member state detailing the precise scenario.”

Scotland is not currently an EU member state and, as European Commission president Jose Manuel Barroso has repeatedly stated, would have to renegotiate membership status in the case of independence.

The question had not yet been asked, Ms Ahrenkilde-Hansen said, and no indication had been received as to when it might be asked.

She said: “I can’t give you any time line because entirely depends on any request we would receive from a member state based on a precise scenario.
“We don’t have a scenario described by a member state on the table at the moment.”

Ms Ahrenkilde-Hansen also confirmed no requests had been received from the countries of two other EU regions looking to become independent – Catalan in Spain and Flanders in Belgium.

She said: “This is generally applicable.
“We would express our opinion on the legal consequences under EU law in the case a member state requested us to do so and on the basis of a precise scenario.”

A Downing Street spokeswoman said the issue would need to wait until after the referendum result, when the Scottish Government could carry out its own negotiations with the EU.

She said: “The UK is confident that our membership would continue and it would be for any independent Scotland to work out what it means for them in the EU.”

A Scottish Government spokesman insisted an independent Scotland would remain part of the EU (it is currently a region), but dodged the question of membership negotiation and how this would work.

He said: “Scotland has been an integral part of the European Union for almost four decades, and an independent Scotland will continue in EU membership, inheriting exactly the same treaty rights and obligations as the rest of the UK.

“By definition Scotland already meets the criteria for EU membership, as acknowledged recently by an expert report.

“As legal, constitutional and European experts have confirmed, Scotland is part of the territory of the European Union and the people of Scotland are citizens of the EU – there is no provision for either of these circumstances to change upon independence.”

However, with the commission insisting the precise scenario must come from a member state, and membership of an independent Scotland in doubt, the position of the commission and the UK and Scottish governments seems to be at odds.

Jennifer McKiernan is a journalist at the Aberdeen Evening Express and a Robert Bosch Stiftung-EurActiv Journalism Fellow.